RCVS Council has unanimously elected Mrs Jacqui Molyneux to become its new Junior Vice-President. She will take up office on RCVS Day, 1 July 2011. 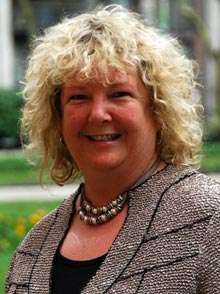 Commenting on her election, which took place at the March meeting of Council, Jacqui said: “As I have become more and more involved with the RCVS and the work of its committees I am amazed at the amount of work being done behind the scenes by both Council Members and the RCVS staff.

"It’s sad that many of the profession live in fear of the RCVS as they are only aware of its regulatory function.

“During my time on the Officer team, communication with the profession will be a priority, not for the vocal minority, but with the silent majority who have no idea of the breadth of the work that the RCVS undertakes each year,” she added.

Jacqui graduated in 1981 from the University of Bristol and started her career in small animal practice in Liverpool, before moving to the North East, and setting up her own practice.

Following its rebuilding, the practice was in 2002 accredited as a Veterinary Hospital and, four years later, has become RCVS Practice Standards Scheme accredited.

Communication with the profession will be a priority, not for the vocal minority, but with the silent majority who have no idea of the breadth of the work that the RCVS undertakes each year

Since her election to the RCVS Council in 2005, Jacqui has chaired the Small Animal Certificate Board and served for four years on the Disciplinary Committee.

She has also been Vice-Chairman of the Veterinary Nurses Council since 2007.

From 2009, Jacqui has chaired the RCVS Awarding Body Board, including the review of the veterinary nursing training system, which, following prolonged consultation with the profession, resulted in the new Diploma in Veterinary Nursing.

Jacqui is currently President of the Society of Practising Veterinary Surgeons (SPVS).

She is studying for a Masters in Clinical Oncology with the University of Birmingham, and holds an RCVS Certificate in Small Animal Surgery awarded in 2000.