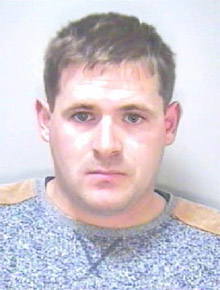 The Royal College of Veterinary Surgeons (RCVS) is warning the veterinary profession not to employ Jayson Paul Wells (see accompanying photo for visual identification purposes), who has fraudulently practised as a veterinary surgeon in the UK and who has pleaded guilty to a number of animal cruelty charges.

“Wells was also convicted for offences contrary to the Veterinary Surgeons Act (VSA) and fraud and has been known to use different surnames, including Kesby, Ceswell, Simpson and Cheswell.”

In 2014, Wells received 19 months in prison and a seven-year ban from owning, adopting, treating or being in contact with animals. He was released in March 2015 and it appears that he is now active in the Republic of Ireland, running an animal rescue sanctuary.

“Although it seems Wells is currently operating in the Republic of Ireland, we would urge veterinary practices to be vigilant when interviewing for new veterinary positions. For example, it is recommended that potential employers contact the RCVS Registration Department to make checks, always interview a potential employee face-to-face, ask to see supporting identity documents, prepare questions which confirm where and when they studied, and obtain references. If they are employed, it is wise to mentor the new member of staff to oversee their performance”, says RCVS Registrar Eleanor Ferguson.

Cases of individuals such as Jayson Paul Wells practising as a veterinary surgeons are extremely rare, with around 25,000 veterinary surgeons registered to practise in the UK who are fully-trained professionals dedicated to upholding and improving the health and welfare of animals under their care. The RCVS does not believe that the unprecedented actions of one fraudulent individual should, in any way, undermine the confidence and trust that animal owners place in their veterinary team.