A day of firsts as RCVS holds unprecedented virtual AGM

This year we held our first ever virtual Annual General Meeting (AGM) which, among other things, saw the investiture of the first black woman as RCVS President and the first male veterinary nurse to chair Veterinary Nurses Council (VNC). 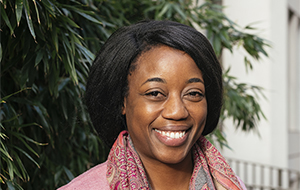 In her opening address as RCVS President, Dr Mandisa Greene (pictured) acknowledged the symbolic significance of her being the first person from a minority ethnic background to hold the office, commenting: “When the College was founded in 1844, it would have been unthinkable that a woman, let alone a black woman, would become President of the institution one day. I am immensely proud of this achievement and, while it clearly demonstrates progress, there is still plenty to do in widening access to our professions.”

She added that she hoped to use her position as President to act as a role model to young people from under-represented groups, in order to encourage them to consider careers in veterinary surgery, as well as supporting those already in the profession.

She gave a recent example of where she encouraged Reanne, a young woman who, like her, was from an Afro-Caribbean background and had always wanted to a vet, to conquer her doubts about joining the profession and successfully apply to study at Liverpool Vet School.

Mandisa, a graduate of the University of Edinburgh in 2008 and an elected member of RCVS Council since 2014, added: “I also take the Presidential baton from Niall to champion a more diverse and inclusive profession with renewed intention, and look forward to playing my part in our upcoming Diversity & Inclusion Action Plan.

“As recent weeks and the Black Lives Matter movement have highlighted, there is more to be done, and we are committed to doing the work necessary. It is essential that we support all members of the veterinary team to work in an environment that is free from discrimination and racism.”

The 177th Annual General Meeting of the RCVS took place on the morning of Friday 10 July 2020 with proceedings being introduced by outgoing RCVS President Dr Niall Connell who acknowledged the extraordinary nature of this year’s meeting.

After approving the minutes of last year’s meeting and hearing a message from the College’s Patron Her Majesty the Queen, Council went on to approve the Annual Report & Financial Statements for 2019. 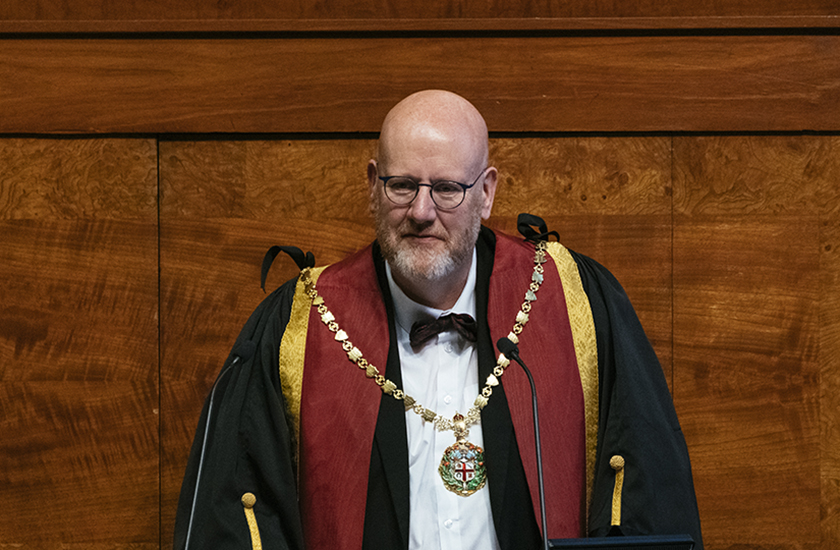 Dr Connell (pictured) also read out the answers to two questions that had been received in advance of the meeting regarding the Annual Report & Financial Statements.

The first was from President of the British Veterinary Association (BVA) Dr Daniella Dos Santos MRCVS on behalf of BVA members, and the second from Alastair Welch MRCVS. We will publish the full answers to both questions in due course.

The proceedings then turned to changes to the membership of RCVS and VN Councils, starting with the results of the RCVS Council election, which saw successful candidates Dr Kate Richards, Dr Richard Stephenson and Dr Melissa Donald formally welcomed on to Council for four-year terms.

The proceedings then turned to changes to VN Council with this year’s election (the first since 2017) seeing a record number of candidates and voters, with the election of Matthew Rendle and Claire Roberts for three-year terms. It was also confirmed that appointed lay member Dominic Dyer would serve another three-year term, and the appointment of two new lay members was announced: Stephanie Richardson and Sarah Fox.

Dr Connell also gave his thanks to VN Council lay members Wendy Drinkwater, who stood down in January, and Professor Susan Proctor, who retired at the AGM.

After a short break, Council then reconvened for the investiture of the new President and Chair of VN Council and speeches.

The first speech was from the outgoing Chair of VN Council Racheal Marshall (pictured), who was praised by Niall for her diligence as Chair, her drive for raising the profile of the profession and, in particular, her recent work on mitigating the impact of the coronavirus pandemic on student veterinary nurses through her chairing of a special taskforce set up to develop an alternative assessment method to the objectively-structured clinical examinations (OSCEs).

In her speech Racheal, who had served as Chair since 2018, said that, while the profession had come a long way in recent years, she wanted to concentrate on the future, urging members of the profession to take part in the upcoming consultation on legislative reform, which could lead to wide-scale enhancements to the profession.

“This is the opportunity for all nurses to provide their feedback and I urge every veterinary nurse to read the report, complete the consultation and encourage all their colleagues to get involved as well. Things will not change if we sit back and rely on someone else to make it happen. We all have a part to play in the future of veterinary nursing,” she said.

Referencing the VN Futures project, a joint endeavour between the RCVS and the British Veterinary Nursing Association (BVNA) to help the profession prepare for and influence its future, she added: “With the project reaching the end of this cycle, now is the time to consider what comes next. I encourage you to think big and not be short-sighted about what the future of veterinary nursing could be.”

Following Racheal’s address, Matthew Rendle and Belinda Andrews-Jones were invested as the Chair and Vice-Chair of VN Council, respectively. 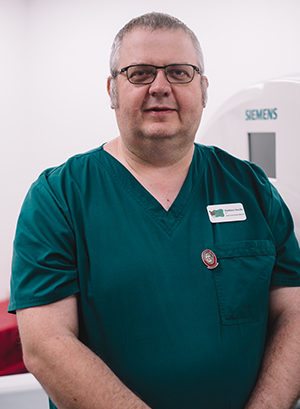 In his opening address Matthew (pictured), an elected member of VN Council since 2016, said: “In the position of Chair, I will continue to keep my fellow nurses very much at heart, whatever the species, environment and role they are working in.

“Veterinary nursing is not an easy profession. When I talk to nurses, they often highlight their biggest frustration with the profession is the extensive lack of understanding about our role and what we can and are very capable of doing.

"Achieving more clarity on our role as veterinary nurses, at all levels is my priority, as I know resolving this could in turn improve several other chronic issues in our profession.”

Following Mathew’s address, it was time for Dr Niall Connell to give his final address as the outgoing RCVS President. In his speech Niall said that when he was first diagnosed with multiple sclerosis 17 years ago, he would never have imagined that the highlight of his veterinary career was yet to come and, while acknowledging some of the challenges during his year as President, highlighted some of the achievements.

This includes the University of Surrey formally being recognised by the RCVS as the UK’s eighth veterinary school, the Graduate Outcomes Project bearing its first fruit with the publication of new Day-One Competences, a digital marketing campaign to promote the Practice Standards Scheme and projects such as Mind Matters, RCVS Leadership and the ViVet innovation initiative going from strength-to-strength.

He also praised the way that the College and his peers in the profession at large were dealing with the two major current challenges facing them: the coronavirus pandemic and the UK’s exit from the EU. For the latter he said: “I’ve been struck by the nature of international cooperation of some of our stand-out moments over the last year and how, true to the motto that accompanies our coat of arms – Vis Unita Fortior – there really is strength through unity. We are still working towards EU Exit – remember that? I genuinely thought I might become known as ‘The Brexit President’, although I fear that moniker will now be superseded.

“Nevertheless, in October, we signed an historic mutual recognition agreement with the Veterinary Council of Ireland to recognise each other’s veterinary degrees.

“Then, in January, we signed a joint statement with BVA and the FVE that the European veterinary community remains united, with the emphasis on the highest standards of care and animal welfare.”

Regarding coronavirus, he acknowledged the immense pressure and strain it had put upon the profession but praised the way it had risen to the occasion – by continuing to ensure animal health and welfare and public health, as well as by donating time and equipment to the National Health Service.

He added: “Our professions will… get through this, thanks to the incredible veterinary surgeons and nurses working in general practice, specialist practice, education, government, laboratories, and everywhere in between. Working in strange situations and enduring personal hardship, emotional upheaval and financial turmoil, yet still doing their very best for our animals.

“I was heartened to see this huge effort and commitment publicly recognised by the Department for the Environment, Food & Rural Affairs Secretary of State George Eustice in his open letter of thanks to the professions earlier this year.

“To my vet and VN colleagues across the UK: you absolutely deserve the trust and respect placed in you by the public. I salute you.”

In his last official duty as RCVS President, Niall officially welcomed Mandisa as the 149th President of the RCVS, ‘handing over’ his bespoke Presidential chain of office, made by the two daughters of Amanda Boag, over to Mandisa who was, in turn, wearing a special chain made by her two sons and nephew.

After thanking Niall for his leadership during a difficult year, Mandisa went on to outline some of the priorities for her presidential year which, in addition to role-modelling, includes helping to deliver the College’s new five-year Strategic Plan; demonstrating appreciation and recognition for the contribution of EU veterinary surgeons so that they continue to want to live and work in the UK; and improving the College’s engagement with and recognition of general practitioner vets.

Referencing the main areas of focus for the College’s Strategic Plan, she concluded: “Leading our fantastic professions through such times, alongside my fellow Council members, an amazing RCVS team, and all our stakeholders and supporters, is such an honour.

“There is much to do, but we must continue to forge ahead and aspire to greatness. We shall move forward with clarity and compassion in these times of uncertainty, and with the courage and confidence to tackle the difficult challenges and exciting opportunities ahead.”

All of the pre-recorded speeches from the day are available to view on our YouTube channel and can be read on the Features section of our website.