Celebration and change at RCVS Day 2013

RCVS Day – our Annual General Meeting and Awards Day – saw the investiture of the new President, Col Neil Smith, on 5 July 2013, at the Royal College of Physicians, London.

Neil Smith graduated from the Royal Veterinary College in 1989, and was commissioned into the Royal Army Veterinary Corps (RAVC). He has held a mixture of clinical, staff and command positions, and has worked in many places throughout the world. 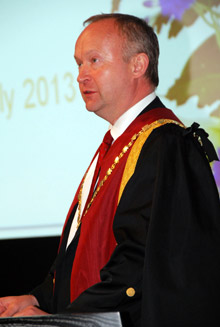 Neil (pictured right) is currently the Director Army Veterinary and Remount Services, effectively the Chief Veterinary Officer for the Army and Head of the RAVC, which has over 35 Veterinary Officers as well as 350 soldiers. He also holds an appointment from the Queen as her Honorary Veterinary Surgeon.

Neil has Masters Degrees in Food Science, Defence Administration and Defence Studies. He has also worked part-time in small animal practice (including the Blue Cross, of which he is now a Trustee), and was heavily involved in the Foot and Mouth Disease outbreak in 2001.

First elected to Council in 2004, Neil was re-elected in 2010 after a short break. He has served on Education, Advisory, Preliminary Investigation, and Planning and Resources Committees, and on the Veterinary Nurses Council.

I am encouraged by the appetite for change shown by my fellow Council members – and indeed the profession at large.

In taking on the role of President, Neil thanked Jacqui Molyneux for her “knowledge and determination” over the year, saying: “I would like thank Jacqui for guiding us through a busy and challenging year of significant organisational change. She has been an approachable and down-to-earth President.”

He also looked forward to his year in office, commenting on the new strategic plan that is under development, and saying: “I look forward to playing my part in taking the College into the next phase of its evolution and I am encouraged by the appetite for change shown by my fellow Council members – and indeed the profession at large.”

At the event, Dr Jerry Davies stood down as Vice-President, with outgoing President Jacqui Molyneux thanking him for his “steadfastness” and support. 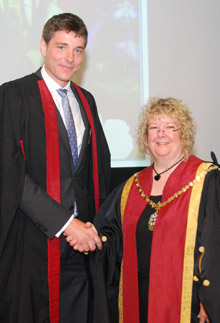 RCVS Day falls into two parts: the AGM and the awards ceremony.

Dr Christopher Sturgess and Niall Connell were also confirmed as having been elected, for three years and two years respectively, to take the seats of two Council members who resigned to take up places on the newly-constituted Disciplinary Committee. 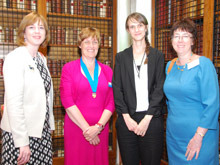 Meanwhile, Amy Robinson was elected to the VNC, and Andrea Jeffery was re-elected – both for four-year terms. Amy Robinson was present to be welcomed to the Council by Chairman Kathy Kissick, who also welcomed new lay members Alison Carr and Professor Sue Proctor (all pictured), and thanked retiring VNC members Jill Nute, Rev Tony Birbeck, Richard Hooker and Louise Glysen.

Kathy Kissick was also presented with a VNC Chairman’s medal by past-President Jill Nute, a long-term supporter of veterinary nurses within the College. Jill had kindly commissioned the new medal, as well as pins for past-Chairmen of VNC: Liz Branscombe and Roger Eddy were present to receive theirs. 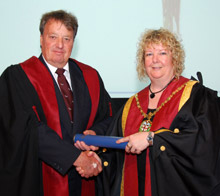 Outgoing President Jacqui Molyneux conferred a range of awards, including an Honorary Associateship to Dr Kirsten Rausing, who has made an outstanding contribution to equine health and welfare through her work for the thoroughbred racing industry and her support of veterinary education and research.

Dr Rausing was particularly commended for “her understanding of veterinary issues that affect thoroughbred breeding and racing, especially those involving infectious diseases… [she] constantly strives to improve standards and has made invaluable, perceptive contributions to the development of the equine veterinary profession.”

"As an ambassador for the veterinary profession and for the specialty of clinical pathology, her contributions have been outstanding.”

An Honorary Fellowship was also bestowed upon David Franklin, an equine veterinary surgeon who has contributed greatly to raising clinical and professional standards throughout his work both as a practising veterinary surgeon and with the Veterinary Defence Society.

“He is a great communicator, treating all individuals with the same empathy, fairness, wisdom and professionalism. This is a difficult blend of qualities, and it has been present in David’s work in simply exceptional measure,” said Jacqui Molyneux.

A final Honorary Fellowship was presented to Colin Whitaker (pictured), a farm animal veterinary surgeon whose work led to the discovery of bovine spongiform encephalopathy. 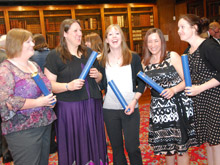 “There can be no doubt that Colin’s sharp, intuitive attributes as an experienced farm animal clinician were a considerable aid to the diagnosis and control of this devastating condition,” said Jacqui.

“The relevance and importance of Colin’s clinical acumen and determination cannot be underestimated, and he has made a significant contribution to the standing of the practitioner in the field, as well as veterinary science.”

Fellowships were awarded to Michael Guilliard, for work in the field of distal limb injuries in greyhounds, and to Professor Martin Sheldon, whose subject was infection and immunity in the female genital tract of cattle.

Veterinary diplomas were awarded on a range of subjects, from Cattle Health and Production to Veterinary Cardiology, and veterinary nurses were presented with their Diplomas in Advanced Veterinary Nursing (DipAVN), including the first three to achieve the DipAVN (Equine) – Natalie Fisk, Kate Lomas and Marie Rippingale. 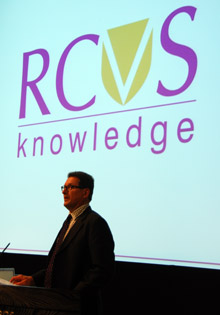 Executive Director of the RCVS Charitable Trust, Nick Royle, took the opportunity of RCVS Day to relaunch the charity as RCVS Knowledge, and outlined its new focus and direction.

He explained that the name change came alongside a refocus as a “global intermediary for evidence-based veterinary medicine,” saying that the charity was “ideally placed to generate, collate and distribute high-quality information to support evidence-based practice, and we are developing the tools to help practitioners make well-informed treatment decisions.” 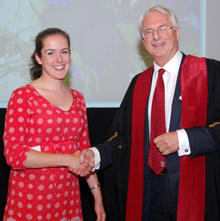 Professor The Lord Trees announced that the first Parliamentary Veterinary Intern would be Hannah Jordon, who had that morning heard that she had passed her final exams at the Royal Veterinary College.

This new role is financially supported by the RCVS, the British Veterinary Association (BVA), the National Office of Animal Health (NOAH), four practices – CVS, Medivet, the Goddard Veterinary Group and Willows –  and the veterinary schools at the Universities of London (RVC), Nottingham and Liverpool.

Professor The Lord Trees described this new one-year rolling internship as “An exciting career development opportunity for a veterinary student or veterinary surgeon, to be inspired, and to develop an aspiration to engage with the really big issues that confront us, both nationally and internationally.” 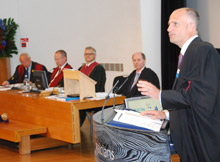 The CEO, Nick Stace, gave a short introduction to the President’s address, saying that in his first nine months in the role, he had found the profession to be “extraordinarily welcoming” and that it was a “real privilege to be leading your regulator and Royal College at this time.”

He praised the dedication of the staff, saying that this was not just his opinion, but had been borne out by research as part of the First Rate Regulator (FRR) initiative and feedback from Council members and others.

He outlined activities to date, which included him spending time with vets in practice, making his email address accessible to all and carrying out research into what the College did well and what it could do better, as part of the FRR initiative.

He went on to outline proposed changes, which included the development of a three-year strategy plan, an overhaul of the RCVS Charitable Trust, to become RCVS Knowledge, the evolution of the Practice Standards Scheme, and continued moves to enable the RCVS to become a first-rate regulator and Royal College.

Finally, he handed over to President Jacqui Molyneux, describing her as a passionate, purposeful and practical President. 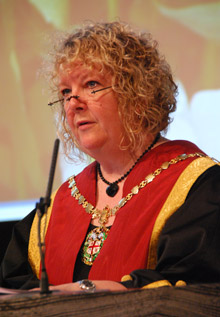 The President then made her outgoing address. She began by describing her year as “a period of great change” saying that it was “amazing what had been achieved in such a short time”.

She went on to discuss the positive changes that had been made during the year, such as the bringing into force of the long-awaited legislative reform order, which meant that members of the Preliminary Investigation and Disciplinary Committees would no longer be members of RCVS Council.

She also outlined the new governance structures at the College, including the setting up, in 2012, of the new Audit and Risk Committee, and, as of RCVS Day 2013, the establishment of a new Operational Board, consisting of the Officers and major Committee chairs, the Head of Legal Services and the CEO, to take more responsibility for running the College.

“This will leave the Council to debate and plan the more strategic issues that affect the profession,” she said.

The establishment of a new Operational Board will leave the Council to debate and plan the more strategic issues that affect the profession.

She described projects underway, including the establishment of a ‘middle tier’ of practitioner, to be known as the ‘Advanced Practitioner’, which, it is envisaged, “will consist of veterinary surgeons with a Certificate or equivalent who will undergo revalidation along the lines of the Specialists”.

And she touched upon the review of the Practice Standards Scheme, which will deliver a Scheme that is “modular and flexible”, providing “a framework for practices to keep improving their standards”.

She also announced the headline results of a survey into the job prospects of recent graduates, saying that the recent increase in the numbers of veterinary graduates appeared to have had little effect on employment rates.

She concluded by saying: “This has been an exciting and innovative year… and I think the next few years will see a continuation of those positive changes, which should ensure that we have a Royal College of which we can all be proud.” 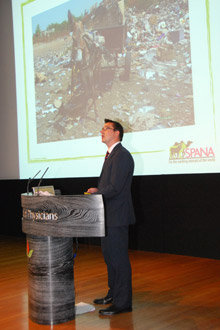 Guest speaker at this year’s event was Dr Andy Stringer, Director of Veterinary Programmes at the Society for the Protection of Animals Abroad (SPANA).

Dr Stringer’s talk outlined the hardships suffered by working animals, in relation to poor diet, overwork, overloading and infectious disease, and the important role that these animals - which are often excluded from national animal health and welfare policies - play in the lives of many struggling to make a living in the developing world.

He explained the vital role that SPANA plays in the provision of training to local vets and animal health professionals, education to owners and the operation of mobile veterinary clinics, and also the charity’s engagement in research.

It is through such work that these working animals can be treated effectively, improving their health and welfare, and, where possible, returned to working status as swiftly as possible.

More images from the day are available on our Flickr photostream.