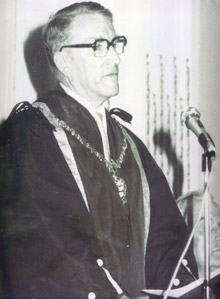 We were saddened to learn of the death of a former President of the College, Peter George Hignett HonFRCVS.

Mr Hignett graduated from Liverpool in 1947 and went into general practice in Kent, before moving to the Wellcome Veterinary Research Station in Frant, East Sussex.

His area of focus was reproduction in cattle, and he became a lecturer at Glasgow in cattle infertility in 1954, where he remained for 22 years, progressing to the post of Reader in charge of the Department of Veterinary Reproduction.

In 1976, he moved to the Hampshire Cattle Breeders’ Society – an artificial insemination centre at Lyndhurst in Hampshire – where he was general manager and veterinary surgeon in charge, a post he continued to hold when he became President of the RCVS in 1981.

He left the Hampshire Cattle Breeders’ Society in 1982 to join the PDSA as Regional Veterinary Officer, from where he retired in 1990.

Mr Hignett had first been elected to RCVS Council in 1972, and was also past President of the animal breeding division of the British Veterinary Association, the Society for the Study of Animal Breeding. He was awarded an Honorary Fellowship of the RCVS in 1998.

His was a veterinary family, with his brother Samuel elected RCVS President in 1973-4, and his son Brian also a veterinary surgeon, practising in Devon.

“It is always sad to hear of the passing of a fellow veterinary surgeon, particularly one who contributed so much to their profession, both politically and in terms of scientific advancement,” says RCVS President Neil Smith. “Our thoughts are with Mr Hignett’s family, friends and colleagues.”