RCVS Council met on 3 March, under the chairmanship of President Peter Jinman. The minutes of the meeting will be available in due course. In the meantime, read on for a brief summary of some of the key decisions. 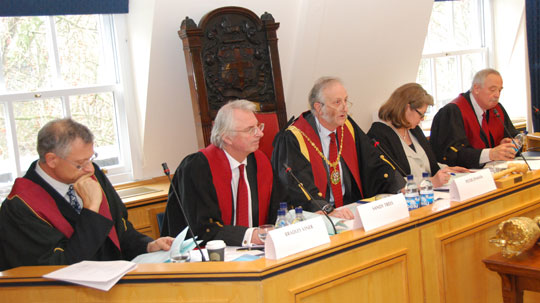 Further detail on some of the decisions made, and their impact, will be found in the March 2011 issue of RCVS News.

Professor Stuart Reid, former Head of the Veterinary School at Glasgow, has recently replaced Professor Quintin McKellar as Principal of the Royal Veterinary College and took over his place on Council.

Code of Conduct for Council members

A draft Code of Conduct for Council members was discussed, and included areas such as Council members’ legal liability, confidentiality, conflicts of interest, communication, conduct and feedback.

It was developed on recommendation from the Governance Review Group. Council agreed to adopt the new Code, which will be available on the website shortly.

A report from the Governance Review Group was noted. It announced that Professor Bill McKelvey had been appointed to join the Group, with effect from the AGM in July.

On the recommendation of the Education Policy and Specialisation Committee, Council agreed that the veterinary degree of the RVC (University of London) should continue to be recognised for registration purposes.

It also endorsed the recommendation that recognition be granted to the veterinary degree awarded by James Cook University.

Finally, it approved the decision to grant full recognition to the veterinary degree awarded by the University of Queensland.

Later in the meeting the suggestion was made, and approved, that the College write to the two Australian schools to offer condolences on the difficulties faced due to the recent flooding in Queensland.

A Working Party, under the Chairmanship of Clare Tapsfield-Wright, has developed the draft, which is a marked change in style and format from the existing Guide.

It includes a revised declaration, shorter principles-based sections and more on clinical competence.

The new Code was approved in draft, and will soon be available online for members of the profession and the public to comment upon.

The new Advice Note (no 33) was approved by Council and will be online shortly.

RCVS Council agreed to adopt the report of the Veterinary Nurses Council, which included recommendation for a new outstanding achievement award to recognise either an exceptional contribution to the development of veterinary nursing and/or a positive contribution to animal welfare.

The award forms part of the activities planned to celebrate the 50th anniversary of the veterinary nursing qualification.

At its February meeting, the Planning and Resources Committee (P&RC) had approved a plan proposed by the Education Policy and Specialisation Committee for a new online recording system.

This was reported to Council via the P&RC report. Although there was one controversial aspect of the report, relating to the financial planning of the Lower Ground Floor refurbishment project, the rest of the report, including go-ahead to develop the new online recording system, was approved.

As a statutory Committee of Council, the Preliminary Investigation Committee’s report is presented to Council for note – with no decisions being required.

However, the Chairman of the Committee, Jill Nute, pointed out two areas for particular consideration.

First, that the PIC was currently working on eight cases of potential breaches of the Veterinary Surgeons Act 1966, in concert with three police forces and Regional Trading Standards Officers.

Second, that the Committee wished to stress to the profession the importance of fully explaining the side-effects and risks of veterinary medicinal products supplied to clients, including obtaining consent forms for the use of off-label medicinal products under the cascade.

The full advice can be read on the PIC report.

A motion was laid before Council which recommended that a Working Group be set up to consider the impact of the removal of the current cap on university tuition fees in England on the future diversity of the veterinary profession and on the likelihood of veterinary students intercalating primary science degrees within the veterinary degree course, and to determine if the College could act in any practical way to reduce the impact.

The principle of the motion was passed, although leave was given to the Officer team to refine the proposed terms for the Working Group to ensure that it could achieve something meaningful.

Jacqui Molyneux, current President of the Society for Practising Veterinary Surgeons, was elected unopposed to the post of Junior Vice-President, a role she will take up at RCVS Day in July 2010.

Such transition is conventional, but requires Council’s ratification annually.

Council approved that Council Member Dr Chris Chesney be awarded the Diploma of Fellowship for his thesis entitled: The disciplinary processes of the RCVS 1881-2008.