Today we met a delegation of around 40 animal owners and veterinary surgeons who wished to voice their concern about a recent position statement by RCVS Council on the use of complementary and alternative medicines, including homeopathy.

President Stephen May and CEO Lizzie Lockett received a copy of an online petition that was set up following the statement, which has since received around 15,000 signatures, including around 11,000 from supporters in the UK.

Stephen and Lizzie also took time to hear accounts and stories from the supporters, and to listen to the points they wished to raise. In view of the cold, wet weather, the College had laid on some hot drinks for all the visitors, and invited the delegation inside, but these were declined.

Stephen said: “We were pleased to be able to meet our visitors today and to receive their petition, although it was a little tricky trying to answer questions on a busy London pavement! 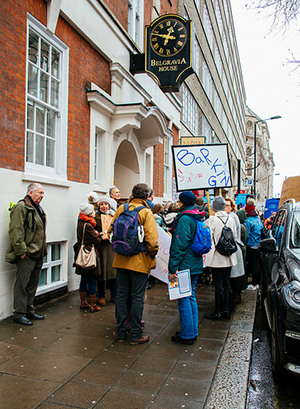 “We continue to recognise that homeopathy and other complementary therapies are popular amongst some animal owners and certain members of the veterinary profession, as indicated by today’s delegation, but it is worth reiterating that the RCVS Council statement does not ban their use.

“What it does state, is that in order to protect animal welfare, we regard such treatments as being complementary, rather than alternative, to treatments for which there is a recognised evidence base or which are based on sound scientific principles.

“This is similar to the position that we have held on complementary therapies for many years, but we will always be happy to receive and consider scientific evidence that demonstrates their efficacy.”