Her Majesty the Queen bestowed the first-ever RCVS Queen’s Medal to Des Thompson OBE at a private ceremony in Buckingham Palace this afternoon. 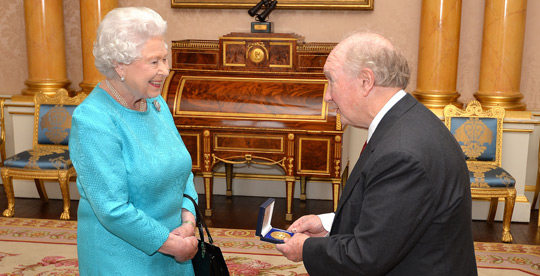 We launched the Queen’s Medal in 2013, with the approval of Her Majesty as our Patron, and it is now the highest award that we can bestow upon a veterinary surgeon in recognition of a particularly outstanding contribution to the profession.

The Belfast-based vet received two separate nominations for the medal, both citing his decades of active involvement in veterinary politics which includes being president of the RCVS, the British Small Animal Veterinary Association (BSAVA), the Society of Practising Veterinary Surgeons (SPVS) and the Northern Ireland Veterinary Association, among other organisations.

Also cited was his willingness to help other members of the profession, particularly young vets at the beginning of their careers, through his involvement with organisations such as the Young Vet Network in Northern Ireland and the Veterinary Benevolent Fund.

Commenting after the presentation, Des said: “It was a complete honour and a wonderful experience to be received by Her Majesty at Buckingham Palace today, and I’m thrilled to have been awarded the RCVS Queen’s Medal.

"Her Majesty was interested to hear about Northern Ireland, and the fact that I’ve been practising there since I qualified.”