We are on the ‘first-rate’ road to reform 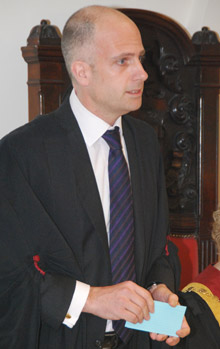 We have embarked on the road to becoming a first-rate regulator, according to Chief Executive Nick Stace, speaking at the Council meeting this morning.

Nick gave Council members an update on progress in his first six months, which have fallen into three work-streams:

Nick advised Council that the first phase around evidence gathering was almost complete, with nearly 5,000 vets, veterinary nurses (VNs) and practice managers, and 20 per cent of public complainants over the last two years, having responded, as well as interviews with RCVS and VN Council members, staff and other stakeholder organisations. Analysis with how the RCVS compares with over 20 other similar organisations was also complete.

The next phase would consider measures to build on the positives and to recommend change around short comings.

Exposing the good, the bad and the indifferent in what we do and how we do it is important if the RCVS is to remain relevant to the profession and the public and to be seen to take seriously the concerns that people have.

Nick told Council: “The road to reform will take time and will be uncomfortable. Exposing the good, the bad and the indifferent in what we do and how we do it is important if the RCVS is to remain relevant to the profession and the public and to be seen to take seriously the concerns that people have.

"It will also be important for the Executive team and the Council to work together on the reform programme with the explicit aim of becoming a first-rate regulator.”

There will be a special open meeting of Council in June to discuss the recommended plans in detail.

Nick also outlined the results of a recent staff engagement survey, which had taken place from 22 October to 5 November 2012. The confidential online survey, carried out by independent specialists Survey Solutions, achieved an excellent 96% response rate.

The results showed an overall ‘engagement score’ of 59, which compared badly with the average score for the top ten organisations at 81, but favourably against the average for the bottom ten at 45.

Nick acknowledged that there is plenty of room for improvement, as well as the fact that the results are likely to reflect a difficult year of change for staff

Positive scores were achieved around staff understanding of the RCVS; job satisfaction and feeling of empowerment; team relationships; advocacy, pride and commitment; and, diversity and fair dealing.

“These results should be seen as the starting point on a journey towards improvement within the organisation, so that we can motivate and retain our team of excellent staff, who are so critical to our success,” says Nick Stace.

“The important thing will be how we take these findings forward, and we have already made plans around four areas of activity: professional development, leadership/structure, work environment and internal communications.”

Also at its March meeting Council agreed to the establishment of a new Operational Board that will manage oversight of organisational activities, with strategic issues and significant policy discussions being taken by Council.

The Operational Board will be chaired by the CEO and will include the President, Vice-Presidents, Treasurer, the Registrar and the Chairs of the Committees.

Council also considered papers on the disclosure of convictions by veterinary surgeons and registered veterinary nurses, draft accounts for 2012, byelaws for the Preliminary Investigation and Disciplinary Committees, General Administration byelaws and the report of a visitation to the University of Sydney’s veterinary school.

Decisions made will be publicised in the March issue of RCVS News, and minutes from the meeting will be available online in due course.