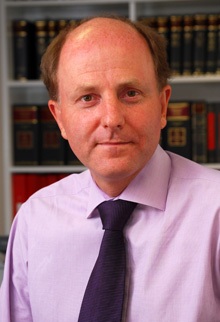 Gordon (pictured), who was previously Assistant Registrar/Head of Professional Conduct, and then Acting Registrar, will have oversight responsibility for registration and professional conduct.

At the same time, Eleanor Ferguson, formerly Acting Head of Professional Conduct, has been confirmed in the position.

The post of Head of Registration has been made redundant, with a new role of Customer Experience Manager created to ensure that the customer (public and profession) journey improves across the organisation. This position will also report into Gordon Hockey.

I believe that an engaged and well-purposed team of staff, with a focus on customer service and driving improvements, lies at the heart of any successful organisation

There have been other changes on the Senior Team at the College. The post of Head of Corporate Services that had been vacant since the departure of Richard Holford last December will not be filled, and Head of Finance Corrie McCann has been promoted to the new role of Head of Operations, which will incorporate finance, corporate services (IT, mailing, reception) and facilities.

Two other posts have been made redundant: Special Projects Manager and RCVS Charitable Trust Director. A new post of Executive Director for the Trust will be developed, with a view to taking the Trust through a full strategic review.

“I believe that an engaged and well-purposed team of staff, with a focus on customer service and driving improvements, lies at the heart of any successful organisation,” says Chief Executive Nick Stace.

“These changes will enable the College to move into the next stage of its development towards becoming a first-rate regulator.”

The changes will mean that the Senior Team is reduced from 11 people to seven, being the Chief Executive plus Heads of Legal Services, Operations, Human Resources, Education, Veterinary Nursing and Communications.